Keep Cool and Carry On 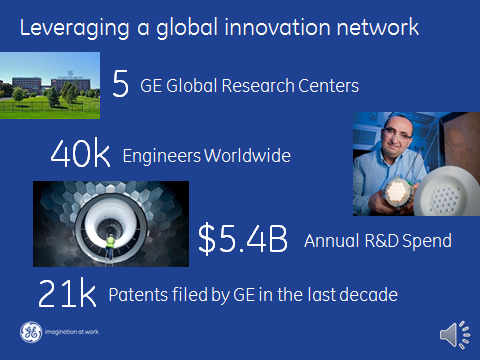 In our last post, we touted GE’s recent presence at AUVSI. It was a great event, but, if we’re being honest, GE Intelligent Platforms was not the star attraction at the GE booth. That distinction would go to our big-brained colleagues from the GE Global Research Center (GRC) in Schenectady, N.Y., who had visitors ooh-ing and aah-ing over their whiz-bang thermal management technology (more later on this one).

Our customers rarely get to interact with the GRC, but it’s a huge part of what keeps GE at the forefront of innovation. A recent report from Capital Alpha Partners shows that, in most of the defense industry, R&D expenditures have been tailing off over the past decade, even as defense budgets were climbing to historic highs. GE has taken a different approach. We spent over $5 billion annually at the last count. Most of that money flows through the GRC, or one of the satellite GRC facilities around the globe.

If you compare the amount we spend at the GRC on foundational R&D, it actually dwarves what any of the services spend individually on equivalent science and technology accounts (6.1 and 6.2 budget codes) projects. In fact, DOD-wide the US spends approximately $8.1 billion, by my count (pre-sequestration); it’s pretty amazing that a private company is spending well more than half that amount. And many of the technologies the GRC is developing end up in our products and, ultimately, on the battlefield.

And this brings me back to that neat cooling system we were showing off at AUVSI. GE is leading the way in developing boards and systems that maximize performance while minimizing size, weight and power (SWaP). A byproduct of all that performance in a small space is, of course, massive amounts of heat. The more power an embedded computing board consumes, the more heat it dissipates. That’s a problem because heat is the enemy of reliability—and reliability in the mil-aero world is, literally, a matter of life and death.

So…how to dissipate all that heat? In systems that aren’t mission-critical, you’d just deploy lots of fans. Fans, however, aren’t known for their reliability. Various convection and conduction approaches are possible to deliver the heat dissipation necessary in a military platform—and they’re highly effective. So effective that approaches like spray cooling have never really caught on.

What the GRC has pioneered is a technology called “Dual Cool Jets,” which allows heat to be removed from an embedded system without the low mean time between failures that is typical of standard fans. Here, you can see Bill Gerstler demonstrating the effects of this cooling method.

At the center of the table is a rugged box typical of GE’s small form factor systems. Normally, this would rely on natural convection to remove the heat from the fins on the exposed surfaces.

But there are limits on how much heat can be extracted this way, as can be seen in the live infrared image on the monitor. This shows that some parts of the box readily reach 85 degrees or more with just a modest power loading in the chassis. At peak performance, the temperature would reach the level at which reliability becomes a real problem.

But by flipping a switch, Bill was able to activate the cool jets (seen as a yellow/green package mounted on top of the chassis). Within seconds, the temperature of the system as measured by the IR camera could be seen to drop by some 30 degrees. Look to see GE deploying this technology in the field very soon.

The cool jets are just the most recent example of the advantage our customers derive from the GRC. With the investments GE continues to make in innovation, it will hardly be the last.