In my previous post here, I looked at how we’ve got to where we are today with GPU technology—how it’s emerged from being just something that made Call of Duty run better to a potentially game-changing technology in a much wider range of environments—not least among them, the battlefield.

CPU (not GPU) based graphics packages can be used to display very fancy 2D graphics in a simple way (Qt, MS Visual Studio, Java Swing, HTML, etc.) but this is inefficient because all the work is done on the CPU, one pixel at a time, and then the result is passed to the GPU memory. The same is true of data processing on the CPU, where each data item is processed one at a time. Even with multiple CPU cores, it can be much slower compared to doing much of the processing on a GPU.

A more efficient way to utilize the GPU is the following: 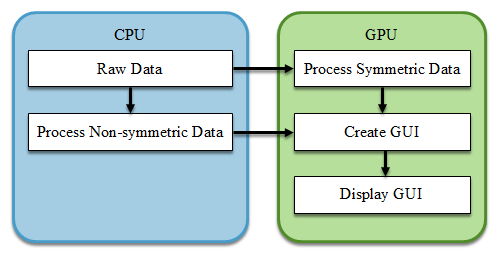 To fully utilize the power of the GPU to create and display graphics, developers use a low-level software API called OpenGL, which has been around since the early 1990s. Specific platforms have proprietary APIs, but OpenGL is a portable open standard for all popular platforms.

The difficulty with OpenGL is its complexity. There is a steep learning curve and a large amount of code is needed to do simple things:

To simplify creating and displaying graphics on the GPU, Abaco will soon be launching ImageFlex 2. With ImageFlex 2, drawing a rectangle, line, circle, arc or text becomes just a few lines of code—not hundreds. That can mean a significant time—and cost—saving. ImageFlex 2 also includes more advanced features such as cropping, rotating, warping, lens distortion correction and so on which can also be achieved with just a few lines of code.

Unfortunately, this interop is not trivial. To help simplify the interop between OpenGL and CUDA/OpenCL, ImageFlex 2 includes functionality to do this for you. Allowing CUDA or OpenCL to draw directly into an OpenGL image is only about five lines of ImageFlex 2 code.

ImageFlex 2 is designed to let our customers easily harness the power of the GPU without the pain of the learning curve—giving GPU yet another advantage over FPGA in addition to those I mentioned in my earlier post.

ImageFlex 2 will provide yet another reason to take a closer look at Abaco GPU and graphics solutions. You can find out more about them here.